Unreal Engine FREE Take a look at the digital person at 3.14m into the video, also Starwars and the ray tracing with reflections and Andy Circus and the alien face. this is amazing technology and all available in realtime without the need for rendering as the game is played.

Follow this up with the How Game Engines Work! video. Which is great for starting to think about how games work and the coding logic and thinking required.

The Language of Film

Shot Size & Type
Shot size is one of the basics of filmmaking. It means how big things are in the picture. An extreme long shot just shows the setting; long shots and mid shots show people in the setting, and closeups show details of faces and objects.

EWS - Extreme Wide Shot - A shot taken from a sufficient distance to show a landscape, a building, or a large crowd. this shot shows the setting
WS - Wide Shot - Shows one or two people in full figure or several people from the waist up.
MS - Medium Shot - Shows head to waist
MCU - Medium Close-Up chest and head
CU - Close-up - A shot of one face or object that fills the screen completely.
ECU - Extreme close-up - A shot of a small object or part of a face that fills the screen. 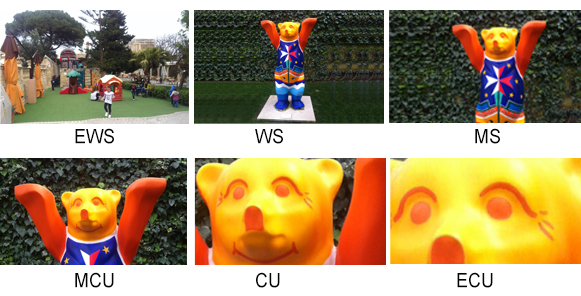 Cutaway - a shot of something related to but outside the main action of a scene. It's a shot that cuts away from the main action to a separate or secondary action – hence its name, cutaway.
Dutch Angle - also known as Dutch tilt, canted angle, or oblique angle, is a type of camera shot where the camera is set at an angle.
OTS - over the shoulder - is a shot of someone or something taken over the shoulder of another person, usually including a portion of the head or shoulder of that person on the edge of frame.

Most shots need some kind of movement to give them life. Keep the camera still to show subtle movements; move the camera – pan, track or tilt – to follow the action or move through space.

Panning The camera is fixed moves horizontally on a fixed base. Panning Camera Move Video
Tilting The camera is fixed and moves up or down, vertically. Tilting Camera Move Video
Never say pan up or down - pan means panorama.
Tracking The camera moves on a wheeled truck (or dolly), or is hand held, but stays on the same plane or angle. Check out the video tracking shots 1.34mins
Zoom Not a camera movement but a shift in the focal length of the camera lens to give the impression that the camera is getting closer to or farther from an object. There is a great Zoom effect in the
iPad Air Ad
Arc Shot - a shot where the camera circles its subject.
Basic Camera Shots including different angle shots
Camera Angles with Zach King Great little video covering a range of different shots, camera angles
Angles and shot types explained from beginning to 2.28m Then some movie samples including Matrix Gun Shot scene. At 3.40minutes in there is a short film with various angles and shot types explained.

Now see if YOU can identify them

Check out this Incredibles 2 scene and list the shots for the first 34secs.

Shot list for the first 34secs of INCREDIBLES 2 Best Scene

Download the storyboard template and draw a Storyboard for the first 34 secs on this scene.

Light doesn’t just help us see things. You can make the mood happy, sad, romantic or scary just by using daylight or room lights and basic reflectors. On the iPad you can use filters to change the colour of your video.

Key Light - A key light is the primary light of the scene. It will be the most intense and direct light source of the entire scene. The sun is a Key light.
Fill Light - A fill light illuminates the shadows that are created by the key light. A fill light is usually placed on the opposite side of the key light, and often not as powerful as the key.
Back light or Hair light - A back light hits an actor or object from behind, and is usually placed higher than the object it is lighting. A back light is often used to separate an object or an actor from a dark background, and to give the subject more shape and depth. Back lighting can help bring your subject out and away from looking two dimensional. Practical lamp.

Sound is a really powerful tool for telling your story and helping make an impact. Your soundtrack can include all kinds of different sounds: Sound Effects or Foley Effects - natural sounds which you record live (or fake with sound effects), dialogue, voice-overs and music.

Music
Music achieves a number of things: it establishes setting; it creates atmosphere; it calls attention to elements; it reinforces or foreshadows narrative developments; it gives meaning to a character's actions or translates their thoughts; and it creates emotion.
Lion King 5 different tracks with the original at the end. How Music Affects Film #17
Foley Effects/Sound Effects
Foley (named after sound-effects artist Jack Foley) is the reproduction of everyday sound effects that are added to film, video, and other media in post-production to enhance audio quality. These reproduced sounds can be anything from the swishing of clothing and footsteps to squeaky doors and breaking glass.
The Magic of Making Sound | That's Amazing
Gary Hecker - Top Foley Artist

Voice-over is the spoken words of a person that you cannot see.
The Spider who Couldn't Hide
Coco Trailer animation

You should be thinking about how your shots will edit together as you’re filming them. Each shot should show something new: either a different thing, or the same thing with a different shot size or camera position.

Transitions
The joining of video clips is the transition from one to the other. Transitions can be an instant scene or image change, a fade, fade to black, dissolve, pan from one person to another, or any digital effect.
Try out the transitions on your iPad.
Cut
The most common transition is the straight cut ie joining 2 clips together with no effect.
Fade in/out
Fade ins and fade outs are the second most common type of transition. Fade outs happen when the picture is gradually replaced by a black screen or any other solid color. Traditionally, fade-outs have been used to conclude movies. Fade-ins are the opposite: a solid color gradually gives way to picture, commonly used at the beginning of movies.
Dissolve
Also known as overlapping, dissolves happen when one shot gradually replaces by the next. One disappears as the following appears. For a few seconds, they overlap, and both are visible. Commonly used to signify the passage of time.
Wipe
Wipes are dynamic. They happen when one shot pushes the other off frame. George Lucas deliberately used them throughout the Star Wars series. Star Wars (George Lucas, 1977)

Wall-e : How to Tell a Story Visually - Pixar Video
Hero’s journey toy story (5mins)
Take notes from the video. Write your own heroes journey story.
Prepare a storyboard for your story.

Using Film Language in one minute In a good film, the audience understands the story that the filmmaker is trying to show them, and feels what the filmmaker means them to feel. To make a good film, you need to know about film language
Glossary of Film Terms - This Glossary is great and has some video samples as well.
Amusing Video about taking The Perfect Gram - taking the perfect picture.

Titling on iMovie is somewhat limited. A great way to add some more interesting titling effects is to use Keynote. Check out this excellent video on how to use type on effects for text:-
How to do the Typewriter Effect in iMovie
Experiment with all the other animations in Keynote as well and see what you can come up with.
HINT Keep titling at least 4cms in from all sides.

Hollywood's History of FAKING IT

The Evolution of GREENSCREEN Compositing

Go inside the history of the travelling mattes (now called chromakey) and learn the history of visual trickery used by filmmakers from the earliest filmmakers through to the modern day.
Filmmaker IQ has a lot of great Filmmaking videos. I particularly liked Hollywood's History of Faking It you students will love it too. This is a great site for insights into movie making. Even young students will enjoy some of the excerpts form the old Movies 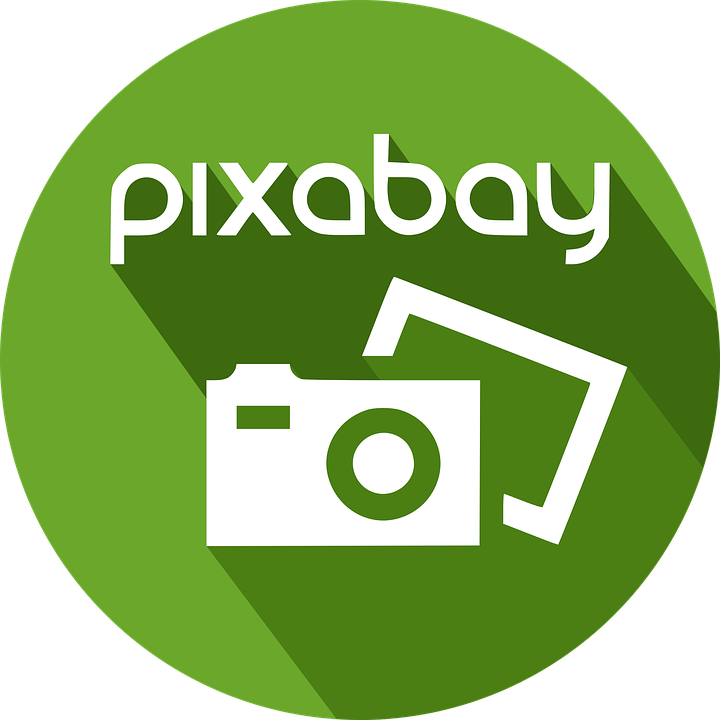 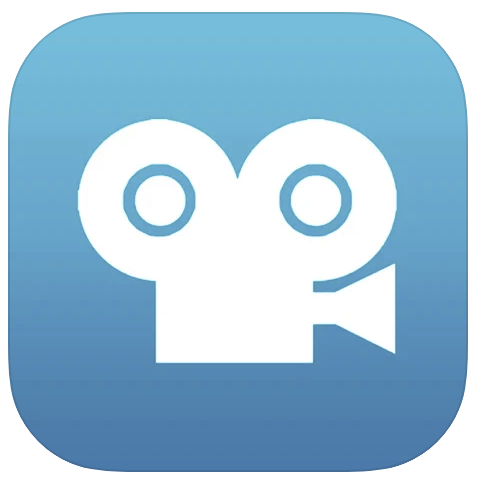 FREE for iphone and ipad.
Fabulous.
Download it now. I played with it for a whole weekend. No instructions needed
your students will be able to figure it out for themselves. A tripod of some sort is suitable. I rigged a simple one up for my iPhone using one of one of the car hands free devices and masking tape. It worked a treat. So simple and easy.

Take a look at the great lesson on TED ED - Animation basics: Homemade special effects
And some great Animation Movies like Luminaris

iMovie is such a great program. So intuitive and easy to use.
It is easy to start, and the results can be well, a MIRACLE. I love
programs that offer easy start up, and immediate productivity, but also extension into more complex and challenging options as expertise grows.
Just recently I worked with some young people attending the President's Secret Garden event in Malta. In about an hour they had written a a short story, taken a series of photos, added them to a iMovie trailer in iMovie, added end credits and produced a short video. We discussed a the purpose of the video, the types of photos needed, introducing terms such as close-up, establishing shot, extreme close-up etc. The results looked amazing, you can take a look at it here:-
The President's Wish.
You could of course provide a detailed linear set of instructions for iMovie but if we are truly trying to develop life long learners, let students discover how to use iMovie for themselves, ask smart questions, google up video tutorials, ask each other for help and work out how to use it. iMovie is great for this as it is soooo intuitive.
Take a look at the Virtual Teacher page on Visual Literacy for some great ideas.
Check out the pdf on Introduce Yourself.
I have setup the Virtual Teacher YouTube Channel so any great movies you make send them along and I will upload them here.